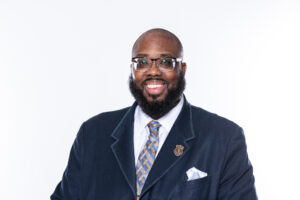 An encourager, Friend, Leader, Teacher, and Visionary are a few attributes that describe Chester Hood. He is a native of Chicago, IL and he now resides in Tallahassee, FL. Chester is a first-generation college graduate who has achieved much academic success that is being used as a road map for his family and his legacy. Chester is a proud alum of Southern Illinois University Carbondale. Chester earned a bachelor’s and a master’s degree in Workforce Education and Development. His specializations are in Human Resources, E-Learning, and Administrative Services.

Chester is an ordained minister and has been asked to serve in a leadership role in every place of employment, professional, and social organization that he has a membership. Serving in ministry for 30 years, while attending school and working gives you an insight into his work ethic and commitment to success. His professional career includes 23 years in the non-profit sector, 14 years in Higher Education, 6 Cooperate America, and a profitable business owner for 10 years.  His education and experience have equipped him to “Encourage Perseverance” from thought to manifestation. Chester is a Professional and Business strategist whose overarching focus is to lead individuals and organizations to change that will lead to the multiplication of game-changers who impact the world.

The Lord was with Joseph, and he was a successful man, and he was in the house of his master the Egyptian. And his master saw that the Lord was with him and that the Lord made all he did to prosper in his hand. So Joseph found favor in his sight and served him. Then he made him overseer of his house, and all that he had he put under his authority. —Genesis 39:2-5 (NKJV)